The Connection Between Listening and Development in Young Children

The connection between listening and a child’s development is well documented.

For example, babies are born with an amazingly advanced ability to listen and absorb sound. Their brains are equipped with a rich system to acquire language and begin to interpret the world around them. In fact, their ability to listen begins in utero.

Hearing their mother’s voice in the womb—her words, tone of voice, singing, and the emotions expressed through her voice—is the earliest way in which children learn. Likewise, they experience the rhythms and movement of their mothers within their own developing bodies from the womb as well.

Early childhood researchers have discovered the power of what they call “language nutrition.” The brains of young children are hungry for auditory input. They want to listen and are intrigued by the sounds around them. To their ears, every word they hear formed from our mouths is new and novel, even if we ourselves don’t notice such everyday sounds.

Importantly, this concept refers to active, engaged listening. It does not refer to the mere act of hearing. For these auditory stimuli to impact neural networks, they must be combined with responsive, give-and-take interactions. When hearing combines with social interaction, children learn how to pay attention to what is most important. They learn to prioritize some sounds over others.

The deeper, more complex, and more frequently children are exposed to language, the deeper and more complex their neural networks become. Their brains require the “nutrition” of auditory stimulation in a social setting. This fact of cognitive development makes it clear that listening plays an enormous role in a child’s development. It also underscores the need to frequently read to babies, toddlers, and preschoolers. 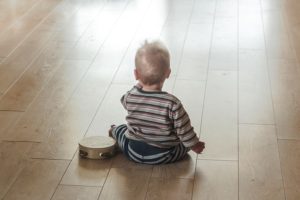 Similarly, there is a reason that music is often a large part in early childhood education. Learning to sing nursery rhymes, create simple rhythms with basic percussion instruments, and move their bodies in step to songs is invaluable to children’s development.

This active involvement with auditory and motor stimuli is building neural networks. It creates a sense of how social groups work together. Children learn that they themselves can make and control sound in conjunction with others through such musical experiences.

During early childhood music play, children also learn how their kinesthetic and visual systems work together with their auditory systems. As taught in the Tomatis method, the auditory system is the one most deeply connected to the other sensory systems. Their senses are integrated during such play.

In fact, because auditory input during early childhood requires an interactive element to be most effective, we can also see that listening plays a great role in helping children develop socially and emotionally. Healthy, complex stimulation of the auditory processing function is required for normal childhood development.

For a number of reasons, however, disconnects between listening and learning can happen in the early years. When these occur, children may develop learning delays or disabilities, increased ADHD/ADD symptoms, impaired social functioning, or other symptoms. Even something that seems as benign as frequent ear infections can lead to such disconnects.

Unfortunately, the typical progression of cognitive and social development in young children might be disrupted due to these disconnections. Fortunately, the Tomatis method has been developed to help restore the ability of children (and adults) to learn to listen effectively, efficiently, and with focus.

If auditory input has not been ideal in early childhood, the Tomatis method offers healing. Likewise, if other factors have interfered with this development, it offers a bridge to growth. It provides a way in which a person’s neural networking can re-build the connections needed to process sound in an optimal manner.

For more information about our work with the method developed by Dr. Alfred Tomatis, please attend one of our Free Monthly Presentations or follow the link.